The Application of Distributed Ledger Technology in Hong Kong

This report presents a blockchain solution to the time-consuming and costly securities clearing and settlement processes currently employed in Hong Kong. Blockchain is a protocol for building a replicated and shared distributed ledger system that can be implemented to process and record securities transactions across a decentralised private network.

While trading activity has become increasingly high-speed and digitalised, the settlement of trades can still take days, exposing banks to the risk that their trading partners could become insolvent during the period after a trade is executed but before it is settled. The re-engineering of the conventional clearing and settlement systems using distributed ledger technology presents an exciting opportunity for the capital markets industry to reduce the cost and time it takes to clear and settle the exchange of financial assets, while at the same time reducing the number of possible single points of failure in the system architecture.

The distributed ledger approach would allow for both the disintermediation of the clearinghouse and the elimination of batch interbank settlement runs, causing settlement durations to be compressed to near-real time and settlement risk to be significantly reduced. The novation of trades by the clearinghouse and the posting of collateral and margin by counterparties would, therefore, be redundant in this approach. The report considers how this nirvana in Hong Kong could be achieved, and highlights the processes that would need to change and the challenges that would need to be overcome for the approach to be successful. 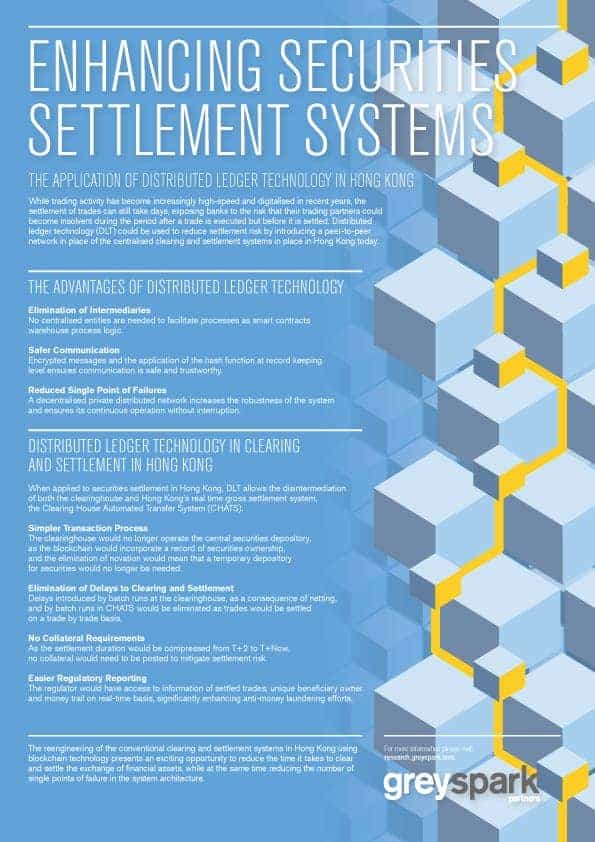