Few banks today develop truly differentiated technology, having moved from being ‘technology makers’ to ‘technology takers’. GreySpark Partners Head of Fintech William Benattar and Senior FinTech Analyst Meri Paterson argue that the development of proprietary software has taken a back seat, and is now only considered in situations where creating a competitive advantage or controlling sensitive data is of paramount importance. To drive technology change, keep a handle on their IT budgets and return to an agile state, most banks have opted for a two-stage approach: (1) reduce capex by getting rid of their most asset-heavy software; and (2) leverage vendors to rebuild economies of scale outside of the organisation, so as to turn internal opex into external.

Over the last five years several banks have entered stage one of this approach and started divesting software that they had originally developed in-house for their own use. Despite some forward-thinking banks such as Goldman Sachs aspiring to become the most advanced ‘tech-enabled’ bank, most banks cannot afford to keep maintaining legacy systems internally, and look to divest some of their technology assets.

GreySpark compiled a list of all instances of banks divesting internal tech assets between 2013 and 2017. Leveraging publicly available information, we analysed the background and motivations behind each of the fifteen transactions that took place over this period. Readers of financial news will remember widely publicised deals such as StatPro’s 2017 acquisition of UBS’s portfolio analysis tool, Delta, but only half of the deals were straightforward sales between two parties. Other deals included carve-outs and spin-offs, reflecting the complex realities of monetising internal software.

In the sample of transactions, GreySpark identified seven different motivations for why a bank would make a change in ownership of a technological asset. The pursuit of growth together and the ability to sell to competitors were the two most frequently mentioned motivations across transaction types.

Growth in this context meant increasing market share – often something the bank could not achieve without joining forces with other big players in the space. An example of a deal partly motivated by market share increase was the spin-off of Goldman Sachs’s EMS, REDI, to a consortium of banks and private equity investors. The participating institutions brought different strengths to the new entity, whether revenue, links to clients or counterparties, distribution channels or complementary technology, resulting in a REDI with much improved capacity and reach.

The ability to sell to competitors came up the most after growth. This motivation was relevant in cases where a bank had developed core banking software whose ideal users were other banks. For instance, Q-CASH, a lending platform created by a US credit union (WSECU) was carved out in 2015 to take advantage of demand in the marketplace and even direct enquiries from banks.

Streamlining-related reasons such as cost-cutting, focusing on core business and lack of expertise were the next most common. Credit Suisse’s 2014 sale of its Excalibur fee and expense management solution to SmartStream exemplifies this reason – the tool had first been developed in 2007 and, at first, helped reduce costs for the bank. As the platform took on other functions, it became the largest database inside the organisation. The simultaneous recognition that it could not be funded forever, and that a third party might be able to turn it into a utility that Credit Suisse could then also use, led to the sale.

While growth-related motivations were the most often-cited individually, grouping motivations together reveals a more inward-looking picture. The stated reasons for the different types of transactions can be thought of in terms of two characteristics. Firstly, does the need to make a change in ownership arise from internal needs and goals, or is it the result of an outside force impacting the bank? Secondly, is the nature of the change protective of existing ways to do business, or expansive, reaching for new sources of revenue? Mapping the stated motivations on these axes results in the groupings in Figure 1. 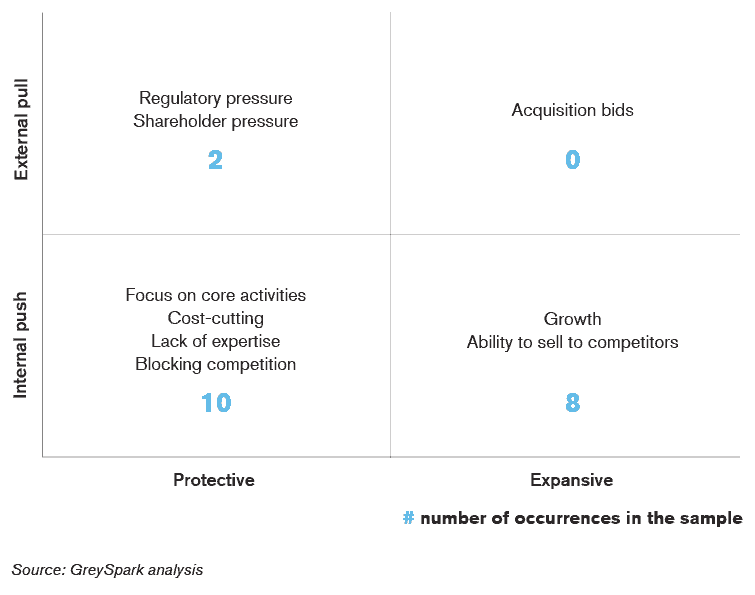 Between 2013 and 2017, the most common quadrant of motivations was the internally pushed/protective (bottom-left) quadrant. As the second-most common quadrant was the bottom-right one, a major pattern in transactions from this period is motivation by internal needs and goals. Conversely, externally instigated drivers were rarely mentioned in conjunction with the deals in the sample.

For Vendors and Investors, an Opportunity to Snatch Assets for Cheap

Looking at the outright sales in the last five years, the proposition for the buyers is clear. The technology assets put on sale are typically the products of years of development and the beneficiaries of millions invested in them. The solutions are in most instances robust, scalable and very functional applications with proven value to financial institutions, and often the buyer is guaranteed a first customer in the selling bank itself. In this set-up the vendor agrees to keep on serving the bank for a lower overall cost than the bank previously shelled out in maintenance costs – a win/win situation. If the new owner can manage to integrate the technology assets well into larger software or a BPO (Business Process Outsourcing) offering, as well as keep on innovating and improving the product while controlling costs, these types of deals can be excellent value for money.

The specific reasons companies buy technology from banks are less complex than the reasons banks sell. Almost all reasons can be broadly categorised as ‘pursuit of growth,’ but four distinct types of growth were found in the sample. Figure 2 shows the distribution of the given motivations by type of acquirer. Expansion and improving existing products and services were the most frequently mentioned motivations in this small data set. 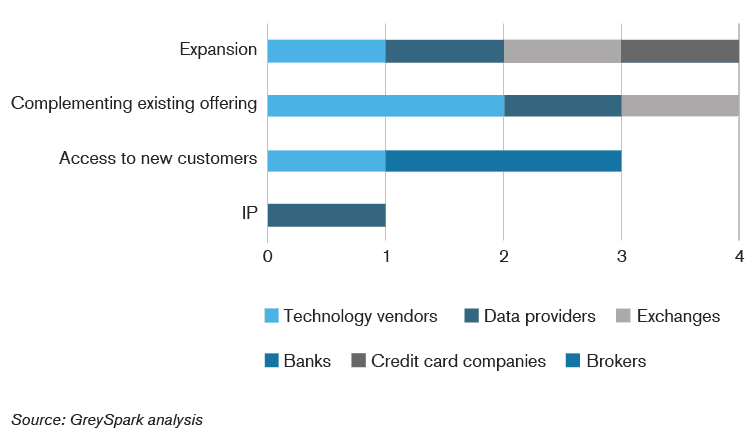 More Divestments on the Horizon

Over the past 18 months, GreySpark has been involved in a number of operations related to acquiring or spinning off technology assets of large investment banks. We expect this trend to continue and even accelerate as banks’ budgets for maintaining or updating their proprietary applications is shrinking and is less and less a source of differentiation.

Investment banking has entered a new era in which technologically advanced banks such as Morgan Stanley, Goldman Sachs, Barclays and JPMorgan are pitched against less advanced players with aging technology stacks. It is a fight between those with a clear and established strategy focused on developing in-house applications and those struggling to innovate and in desperate need to cut costs through syndication, cost mutualisation or selling their assets.

The below table summarises the three different types of transactions discussed in this article along with the main motivations behind them. 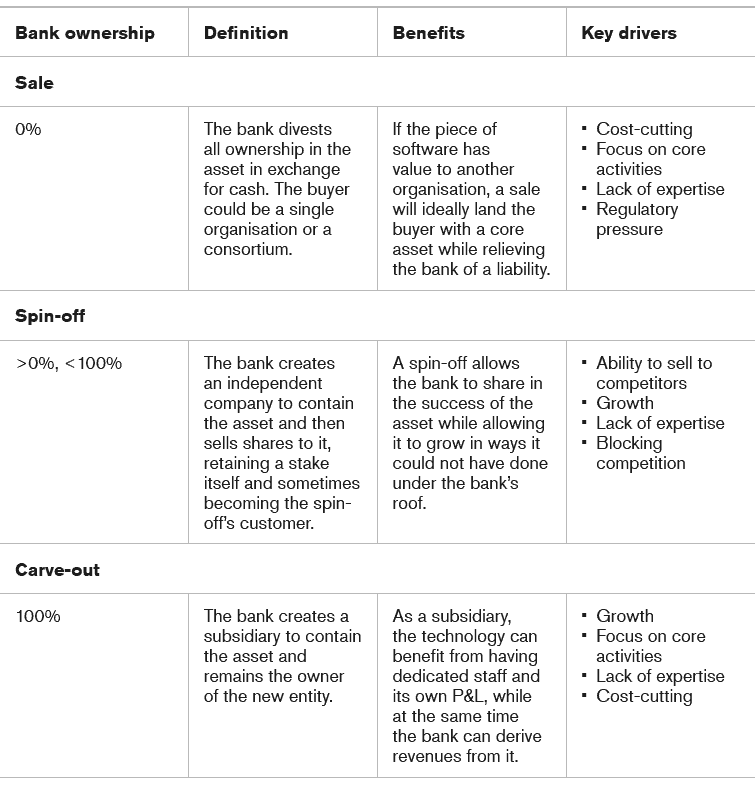 Preparing for the Post-Brexit Landscape

Can Agile Methods Be Applied to the Enterprise?